The Ex – The greatest live band of all time.

Of all time you say? Damn straight. It’s a fact; like gravity.

Active for over 30 years, through numerous musical styles, constellations, countries, DIY records and shows. It’s an amazing journey, and I’ve had the pleasure of witnessing some of it.

Seattle WA, Sunday Feb. 28th 1999. Fugazi are running through what could have been a 2 hour set. It was fantastic, but I was still buzzing about the opening act. The Ex from Amsterdam. At that time they were touring the West coast on the record Starters Alternators released on Touch and Go in the States the previous fall. I can’t remember when I heard them the first time, but I do remember “Frenzy” being performed live that night. A blistering buildup to an incredible live climax. It’s still one of my favorite moments of a live show. Totally unprepared for the fury, I stood there with my mouth wide open; just taking it in. The hairs standing on my neck and the adrenaline pumping through my body at maximum speed. In a “state of shock” if you will. This started my obsession with this band for over the last 13+ years.

Most of The Ex are old enough to be my parents, but they have (still to this day) more youthful energy than any band I’ve ever seen at any age. I’ve had the pleasure of seeing them almost 30 times all through Europe and on the west coast of the United States, and they always deliver something amazing and different from what other bands half their age do.

One of their latest projects is with Ethiopian sax legend Getatchew Mekuria. Over 70 years old, he holds his own with the band. 2006’s Moa Anbessa on Terp Records is a modern classic.

Everyone has a favorite live experience. Everyone has a favorite moment at a live gig. Maybe it was when you got the sweat from Bon Jovi’s armpit on your face, or when you got a guitar pick from Richie Sambora. Maybe you cried while singing “Shot through the Heart” with 10,000 other fans. (Ok, then you are a white trash moron and probably haven’t been to a good show in 2 decades/your whole life, but you know what I mean.) Those live moments that give you an insane euforia no drug or alcohol can ever give you. A moment of pure joy that stays with you for the rest of your life.

For me, maybe it’s seeing The Ex that night in Seattle, or maybe it was the time I saw them in a squat in Germany, or somewhere in a small town in the alps in 2004, or being told to sit down at a gig in Trondheim (I guess I was having too much fun for the club); or maybe it’s dancing and screaming like a little schoolboy at a gig in Paris with Getatchew, or on the west coast at numerous gigs. Maybe it’s just all of it. I don’t know, maybe I’m the moron. Do most people feel that way about music? I mean genuinely feel that passionate about music? I think very few people do. Terrie, Andy, Kat and Arnold do. You can see it. Andy and Terry, still playfully challenging each other on stage. Kats hypnotic drumming and the texts from GW Sok (now replaced by Arnold (Zea), who deliver the words with the same devotion).

The Ex have passionate fans, myself included. Not only are they incredible people who still follow the DIY style now in their 33rd year, but they are still relevant; even more so today. Travelling numerous times to Ethiopia playing for free to thousands of people. Donating the instruments to schools. Not many bands are that passionate about their music or what they stand for. The Ex are more a movement than a band. I admire them as people as well as musicians. The Ex have had a big part in bringing the now fashionable “African sound” to countless indie rock bands in the last few years, influencing many bands without really having great commercial success themselves. Still, they receive plenty of positive criticism and respect in the press and music community.  Not bad for a bunch of old Dutch anarchists.

The Ex have collaborated with Han Bennink, Mats Gustafsson, Tom Cora, Tortoise, Paal Nilssen- Love, Ken Vandermark,  Massimo Pupillo (Zu), and many other talented names within free jazz, noise, experimental and folk music. Over 40 albums and singles and numerous side projects including Original Silence with Thurston Moore, OFFONOFF  with Paal NIlssen Love, or Kletka Red with Tony Buck. They have also worked with poets, visual artists, and dancers….they even created their own orchestra: Ex Orkest and tour often with Brass Unbound.
Behind the boards on their recordings since 1998’s Starters Alternators you will find super-producer and longtime fan Steve Albini of Shellac, who captures the live sound perfectly. 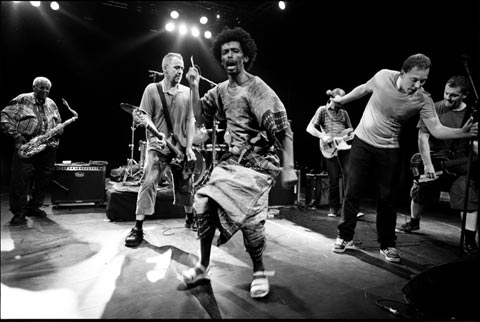 Currently The Ex are touring with Getatchew Mekuria, as well as a horn section (including Ken Vandermark) , and an incredible Ethiopian dancer; and have been booked to the Kongsberg Jazz Festival on Saturday July 7th opening up for The Flaming Lips on the mainstage in the church square.  It will be an amazing atmosphere; I guarantee it. Not to sound overly dramatic, but this will be a special moment in Norwegian musical history; something we might not be able to witness here again.

No matter what kind of music you are into, (this show is a moneyback guarantee from yours truly – if you can find me). You can not help getting caught up in the amazing live performance, and being smitten by the sheer joy on stage. Part punk, part jazz, part folk music, part experimentation. If you’re not at least tapping your toes; check to see if you’re still breathing.

Still going strong since 1979, they are the greatest live band on the planet.
Go and find out for yourselves, if not in Kongsberg, then somewhere else around the world.

For more info about the band check out www.theex.nl.

2 Responses to The Ex – The greatest live band of all time.

This site uses Akismet to reduce spam. Learn how your comment data is processed.